THE SHAMING OF GWENDOLINE C by Gwendoline Clermont is FREE on Kindle at Amazon from Thursday 9 September to Monday 13 September! ASIN: ‎ B08WPNLXP6

The Shaming is the first volume of THE GWENDOLINE TRILOGY:

GWENDOLINE GOES TO SCHOOL: Gwendoline – still with her British lover James, and having acquired Martine a gorgeous French film star as her female partner – becomes a pop and fashion icon of perversity and, because of her hacking skills, an “asset” for various western intelligence agencies. Disaster strikes. James is kidnapped. Killers close in on Gwendoline, and, in a spray of bullets … ASIN ‏ : ‎ B08XYCLCTY

GWENDOLINE WAS RECENTLY INTERVIEWED BY A BOOK PROMOTION SITE

Here below is an edited version of the interview.
I hope you find it interesting.

WHO ARE YOU? TELL US ABOUT YOURSELF

I am Gwendoline – a fictional character – and I have, so far, written three books. They tell the tale of my adventures with James Hewett Spencer, my man, and with Martine Aubin, a stunning French film star, and my female partner. My background? My father left when I was a baby, and my mother, who seemed like she would be a brilliant actress and film star – she was very beautiful – was extremely abusive, and was addicted to alcohol and cocaine; she was diagnosed as suffering from paranoid schizophrenia and was sent to a mental hospital where she became very violent and a danger to the staff and other inmates. She is still there. I see her very rarely. I should tell her story someday. I was raised by my maternal grandmother, Claudia Clermont, who is very rich. She is a writer, ultra-sophisticated – much more than I am. Claudia is my true friend and mentor. I met James in extraordinary circumstances – total humiliation – and I then met Martine and her man, Philip d’Este, a famous French film director, again in really weird circumstances, and the four of us became inseparable; everybody is very understanding about everybody else’s relationships and passions. Martine and I are soul sisters. My math talents – it seems I’m a sort of genius – got me into hacking and hacking got me into international intelligence and police work, and so I have ended up in some really drastic and exciting situations, sometimes as myself, and sometimes radically disguised. LIfe has been one adventure after the other. And I hope it continues. Seize the day, as they say.
Incidentally, the image on the right is me, disguised, my head shaved, covered head to toe in brilliant tattoos, with my nose pierced, disguised as a freak for an underground adventure, heading into the heart of danger, in the volume Gwendoline Goes Underground. 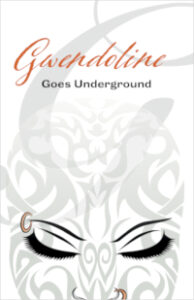 WHAT IS YOUR MOST RECENT BOOK?

My latest book is “Gwendoline Goes Underground.” As I just said, it was inspired by something that happened in my life, and so I tell the whole story about how I had to go underground, penetrate into the mountain lair of one of the world’s greatest arms dealers, disguised as a totally tattooed more or less illiterate, feisty and stubborn, and wonderfully masochistic waif from Appalachia with a perverse taste for dangerously obsessive and homicidal bad boys. I had to do this, with help from Martine, the CIA, MI-6, and the French DGSE, as well as the Russians, so I could save James, my lover, and, then, as it turned out, I had to save the whole world too – from a huge attack by terrorists armed with miniaturized nuclear bombs. I had lots of help, as you will discover.

DO YOU HAVE A PARTICULAR WRITING ROUTINE?

I drink coffee, write often without getting dressed, and I eat a small bit of very dark chocolate each morning. Sometimes I sit at a table on the terrace of our flat in Rome or in Paris. Sometimes, I will go to write – like those old-time philosophers used to do – in a cafe. If I am in Paris, it is usually Cafe de Flore or a small little place down a side street near the Sorbonne. If I am in Rome, I have a favorite cafe on Campo de’ Fiori, and when I sit there I can watch the market in the morning – it closes about 2 pm – and the tourists and kids in the afternoon. I love writing in a cafe, rain or shine. When it rains, I shelter under the awning. I also count – I am very obsessive – how many words I have written in, say, 15 or 30 minutes. I keep track. James and Martine say it is admirable but that I am a control freak and probably very anal.

WHAT BOOKS AND AUTHORS HAVE INFLUENCED YOU?

Influences are complicated things – in life and in writing. Style and ideas and themes are different elements, I think. The Story of O, by Anne Desclos, influenced me, certainly, with its portrayal of sexual and amorous obsession, and its portrait of utter self-abnegation and submissiveness and destruction; it echoed many of my own thoughts and fantasies and obsessions; and E. L. James, with her Shades of Gray series, and Anne Rice, too, when she wrote the Sleeping Beauty books as A.N. Roquelaure. Then, I like everything from Jane Austen to Balzac to Henry Millar and Elmore Leonard and I really loved Anthony Doerr‘s book about World War II, “All the Light We Cannot See.” Leo Tolstoy was a big influence – he showed how vast the world is and how full of adventure – and I wanted adventure, and I wanted to write about it. And I wanted love and passion, and I wanted to write about that too. And I wanted to explore my deepest and darkest and highest and most sublime and more baroque and most perverse fantasies, rather as Nancy Friday did in the 1970s, and I wanted to write about that too. And many many others things. I’m also influenced, a lot by movies and TV series, but most of all, I am influenced by the people I know and love, and even by casual acquaintances. I try to listen and learn. You know, sometimes just a snippet of conversation overheard can be very inspiring, or seeing a person get on or off a bus, or watching the way two girls giggle and lean on each other, or how a person looks out a window.

DO YOU HAVE ANY ADVICE FOR WRITERS WHO ARE JUST BEGINNING?

1) Read everything
2) Sit down and write for 30 minutes and don’t physically stop typing or scribbling, just keep going.
3) An alternative, tell yourself you are going to write 500-1000 words and don’t stop until you’ve done it.
4) Leave criticism and self-criticism for later. Some people can polish a sentence for hours. I can’t and I think most people can’t. So, I think it is best to just plow ahead head-down, non-stop, then you will have something, after 70,000 words, that you can criticize and restructure and work with.
5) Don’t over plot. Have a vague idea of the arc – beginning and end essentially. then just throw your character into a situation and see what she or he does and says and you follow them as fast as you can. If you have a great dramatic situation and a clear idea of your character, then the words almost dictate themselves. Your characters will tell you what to do. Stephen King – a great writer – has excellent key advice in his book On Writing.
5) Later, when you have written a lot, then make a simple diagram – with lines and arrows – or overview of the arcs of the various actions – the principle arc, the minor arcs – and sketch the conflicts (arrows fighting each other), then you can shuffle and mix and improve.
6) Try, in fiction, to put conflict at every level A versus B, conflicts between people, between things, between ideas, between thoughts – even within a single character’s head.
6) Above all – keep writing.

As regards writing, write fast, don’t stop, time yourself, and count the words you have produced; this turns it into an automatic task and lulls the inner censor to sleep, and bypasses the inhibitions involved in facing a blank page or a blank screen and blinking cursor. If you are writing fiction, then think of it a bit like this. You are an actor, playing all the roles, and so you have to throw yourself, body and soul, into the role, and into the situation. If terror lurks behind that half-open door, try to feel that terror, put yourself into the situation, visualize it, see it, sense it, smell it, touch it. And you are the director – you have to be aware of the scene as a whole, of the other actors, of what happened before and what is going to happen next (though your character must not, generally, have a clue about what is really going to happen next) – and so you have to, as the director, orchestrate the action. If you are writing non-fiction keep your reader in mind – what does she know, what doesn’t she know, how can you best capture her interest, how can you best explain the essentials – the essentials – to her in the quickest most efficient, and engaging way possible.

WHAT IS YOUR RELATIONSHIP WITH YOUR ALTER EGO, THIS GILBERT REID FELLOW, LIKE?

It’s weird – it’s sort of shamanistic. It’s like being possessed but I am not sure who is possessing whom and how and when. In First Nations cultures people often speak of being two-spirited, and I think that certainly being two-spirited, accepting, say, one’s male and female side, can be useful, allowing oneself to be porous, to be open, to listen to the masculine or feminine side of one’s nature, to let one’s defenses towards others and towards oneself down; but I think most of us – often without knowing it – are multi-spirited. The American poet Walt Whitman declared, “I am large, I contain multitudes,” and I think most of us, in a more modest way, contain multitudes – we are citizens and clients, men and women, doctors, lawyers, golfers, hypochondriacs, saints and sinners, and often we play many roles – mother, daughter, father, son, mentor, mentee, master, servant – in the space of a single day, or even a single hour.

WHAT IS YOUR FAVORITE BOOK OF ALL?

This is really difficult because I read lots of books. As I said, The Story of O was a revelation. But I think the book that changed my life was Leo Tolstoy’s War and Peace and it’s a whopper of a book, I don’t know how many pages! It showed me how vast life is, how through books, reading or writing them, you can live many, many lives, and pack a multitude of lives into your one life – and that’s the greatest bargain going.